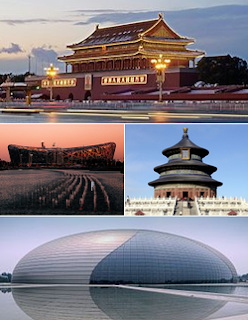 China, a land of beauty and fascination, tempts adventurous travellers all over the world. China has a five-thousand-year history, and there are many tourist attractions that are worthy of being visited.Beijing for example. It is the capital city of China, inside of which you are able to see the forbidden city, that is full of ancient artifacts and collections, and also the famous great wall of china that is made of rocks, and was built thousands of years ago.Moreover, it is the only structure on earth that you can see from the satellite.Apart from Beijing, there are also many attractive and historical places, such as Xian with rock-made ancient soldiers' sculptures, Xitang with the beautiful ancient towns, and also Guangxi with many exotic minorities.China is the fourth largest country in the world, with many different types of scenery. If you want to go to the beach and enjoy the sunshine, Hainan will be your best choice, because it has a fabulous blue sea and beautifull beaches with golden sands.
If you want to climb mountains and experience some exciting adventures, you will have a numbers of options to choose from, like Yellow Mountain, Tai mountain, etc. Many of them have interesting ancient fairy tales, about the strange-shaped rocks: If you want to gamble and have some exciting night life, Macao will be the first place you should go, for it is one of the biggest gambling cities in the world.If you want to go in Beijing upon arrival at the airport in Beijing, you will be met by the guide and transferred to the comfortable hotel. And then, you could have a great rest at the hotel or go to touch the city first by yourself. Amazing sightseeing  starts from paying a visit to the world grandest city square – Tiananmen Square, a frequently viewed scenic spot all the year round. When walking through the square, you might find the majestic forbidden city not remote. As an imperial palace existing for nearly 500 hundreds years, the Forbidden City consists of 8707 rooms and is regarded as the biggest as well as best-preserved royal architectural complex. Then, get on a rickshaw to explore the narrow and clean hutongs and visit the local family as well as have a dainty lunch with the family members. At afternoon, go on to explore the picturesque summer palace.When you will reach in Xian then highlight today is the world-famous Terra-Cotta Warriors and Horses where you might be shocked by the rows of life-size warriors in order. After a local dainty lunch, make a stop at the square infront of the Big Wild Goose Pagoda and choose the best angle to view this "Leaning Tower of China". As walking around the square, you can also appreciate the exquisite architectures and sculptures on its two sides.The tour of Guilin is enough amazing. When cruising down the Li River, you would be fascinated by a picturesque view seen only on photos. If you wish to get a glimpse of Chinese country life, after disembarking, the dream would come true because you will be arranged to take a battery car to go through the local countries and fields to experience really fresh rurality. Finally, go back to Guilin. The lunch is to be eaten on board.

In Shanghai the first sightseeing stop is the Shanghai museum where you could see lots of splendid Chinese treasures, and then you will take a walk around the Bund. After lunch, continue to visit the Yuyuan Garden and Bazaar. Finally, roam the Tianzifang, a neighborhood with clean alleyways and featured stalls, restaurants, cafes and shops of selling artwork.
Posted by Prakriti Inbound at 12:32 PM No comments:

Email ThisBlogThis!Share to TwitterShare to FacebookShare to Pinterest
Labels: China

Tripadvisor Choose Istanbul in Top 25 Destinations of the world

Only Istanbul is the metropolis to straddle two continents and the mixture of cultures where both current and historic makes Istanbul a totally unique and fascinating place. Istanbul has been a settlement of some type on the bank of the Bospheros where Europe and Asia meet since Neolithic times. Istanbul has been an important city from something around 660 BC. There are many places to visit in Istanbul like as Hagia Sophia, The Blue Mosque, The Grand Bazaar, Topkapi Palace, The Galata Tower, Bosphorus Cruise. There are some more attracting buildings and their own history like as Hagia Sophia and Blue Mosque, which attracts the travelers to travel in Istanbul. Where some people prefer the Blue Mosque and some prefer the Hagia Sophia as a result allows you to explore a lot more and has a lot more to offer a tourist than the Blue Mosque. The Hagia Sophia was originally a church but now it is converted in to a museum while the Blue Mosque is in daily use as a Mosque.  The Galata Tower is a total of nine stories and it is much higher than the buildings around and on a high point as well. Where a Bosphorus cruise will let you skirt between Europe and Asia and take in the vista of the Asian and European city, sites clearly visible from the river include the Topkapi Palace, Maiden Tower and other parks and palaces.  Whatever the reason the Republic of Turkey made Ankara the capital but Istanbul is still the cultural, and business capital and by far the largest city in Turkey. Istanbul has much more to see and do in Istanbul and by walking  between these sites whenever possible you will get the chance to take in the feel of the city and come across many charming  streets and of course shops, cafes and restaurants to enjoy and take in the unique Istanbul culture from.

The city of Istanbul is one of the world’s most interesting cities.Its unique location, literally bridging the gap between 'East" and "West". From its famous mosques and churches like as the Blue Mosque, Süleymaniye Cami, and Hagia Sophia, through palaces (The Topkapi and Dolmbahce). Places in Istanbul like Topkapi Sarayi (Topkapi Palace) was built by Mehmet the Conqueror and dates from 15th century.
“No city has eaten the fruits of the garden of art so richly as the city of Istanbul, birthplace and school of famous men, the nursery of many nations.”

Marmaris Turkey Holidays are the most desired holiday destinations among the several holiday destination in the Turkey. It is situated on the South west of Turkey along the Mediterranean coast and allures millions of tourists from all over the world.  The historic city Marmaris is located along the sea side, the vast beaches offer several water activities where you can enjoy the true colors of your life.Marmaris has great mansions and forts that make this city so special and historical.Marmaris is a great city for history lovers and it is a wonderful place for fun-lovers too. Not just the comfortable climate and the natural beauty draw tourists from the entire world, but Marmaris has beautiful historical places to visit too. As the population in this city is not much, the entire population blows up to 400,000 people in all.

Fethiye, Turkey:
It has an excellent marina and good night life. Fethiye is a tourist town with an international atmosphere. Fethiye is a very old town with few old buildings. Fethiye’s inner bay is an excellent natural harbour, protected from storms by an island, Sovalye Adasi the much larger outer bay has 11 more islands. Only Fethiye is the city in the world where you'll find sarcophagus in the streets. There is a resort that provides a peaceful haven today as it has done for hundreds  of years before.

Kalkan is attracted the visitors for holiday from the 300 days of sunshine a year, the charm of the local people and the luxurious facilities offered by the many hotels and restaurants.In a Kalkan serene resort bathed in warmth and surrounded by the natural beauty of southern Turkey, holidays to Kalkan are most often based around the golden sand beaches and the plethora of first-class restaurants in the town Listed by The Independent as one of the top tourist destinations of 2007.

Ephesus, Turkey:
Ephesus provides a detailed, authentic view of  ancient life. The city's ruins illustrate how ancient cities worked and how the people played. Ephesus is an ancient city in the process of being excavated and restored. Ephesus is also known as the location of the Temple of Artemis which is also called the Temple of Diana, which was one of the Seven Wonders of the Ancient World.
Kusadasi, Turkey:
Kusadasi (Bird Island) is a resort town with great restaurants, good hotels, numerous beaches and pleasant hosts. Kusadasi is a good place for anyone interested soaking up the sun and relaxing at the beach.  You may want to see the Byzantine Castle on the actual Bird Island for which the city is named as Bird Island, as its museum is interesting, though not spectacular.

Goreme is a town in the Cappadocia region of Turkey. The town is centered in the middle of an internationally popular region that is best known for its natural rock formation, also called “fairy chimneys”.  Cappadocia is the area of Turkey known for these dwellings and is a very interesting place to visit. Ürgrüp is a good town to base your exploration of  the area because of its size and the quality of the facilities offered. The Goreme Valley  which is the center of the cave homes. Take a tour or hire a guide to  benefit from the cultural richness of this area.

Bodrum, Turkey:
Bodrum is a scenic town whose center is the famed Castle of Saint Peter (built by the Knights of Saint John  who is  the Hospitallers).  Bodrum has much to offer and should be considered as a base to explore the surrounding countryside.

Antalya, Turkey:
Tourist from all over the word discovering that an Antalya has a fabulous mix of great beaches and traditional Turkish culture and Antalya is the fatest-growing city in Turkey country.It is beach a beach park,which features a water-fanatic's dream. Must see Hadrian's Gate and also do not miss like as Antalya Archaeological, Hierpolis and Pamukkale, Duden Waterfalls

Mud baths & hot Springs,breeding grounds,loggerhead sea turtle are some of the magical features of Dalyan.Mountain biking,Trekking,boat Trips and beach sports will satisfy your adventure.There are some other things to do must like as the ornate Lycian tombs,carved in to the cliffs.
Posted by Prakriti Inbound at 1:18 PM No comments: