Rishikesh : Yoga Capital of the World 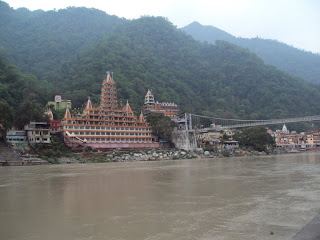 Legend has it that the sage Raibhya Rishi did severe penance and, as a reward, God appeared to him in the form of Rishikesh. Rishikesh also represents the site where Lord Vishnu vanquished the demon Madhu. The place is known as the Tapo Bhumi or the place for meditation of the Gods. Tapovan, on the other bank of the Ganges, houses a temple to Lakshmana. It is believed that Lakshmana, the younger brother of Lord Rama, carried out penances here. The Neelkanth Mahadev temple is believed to be the site where Lord Shiva had drunk the venom that came out during the churning of the ocean. In the 1960s, the place came into limelight as the place where the pop group Beatles met their guru, Maharishi Mahesh Yogi.
Location: Rishikesh is located in the northern part of Uttar Pradesh. It is 238 km northeast of Delhi and 24 km north of Haridwar and spreads on the right banks of the Ganges, at its confluence with the Chandrabhaga stream. It is surrounded by hills on three sides and is perched at an altitude of 356 meters above sea level.
Languages Spoken: Hindi, Garhwali, English
Long Distance Code: +91-135
Importance: Famous for its Ganga Aarati
Area: 11.2 sqkm
Best Time To Visit: September To November
Rishikesh Attractions:
Nilkanth Mahadeo
Mythology says that in the ancient times when the ocean was being churned for 'amrit' (Potion for immortality), first venom oozed out. Lord Shiva drank the venom at a place, which is now called Nilkanth Mahadeo. It is 12 km from Rishikesh and is surrounded by peaceful forests.
White Water Rafting at Rishikesh
The challenge of violent rivers is no less than that of the rugged mountains. The icy heights of the Himalayas are the source of some of India's mighty rivers. Fed by innumerable streams, they race along tortuous boulder 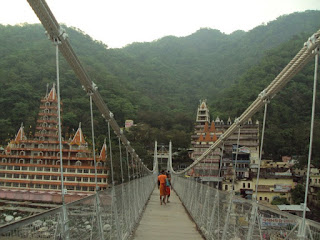 Lakshman Jhula
This suspended iron bridge was built in 1939 and has been a major attraction among the tourists. It is said that Lakshman crossed Ganga on jute ropes between the places where this bridge is built. Ram Jhula- The other suspended Iron Bridge was recently constructed between Shivanand Ashram and Sawarg Ashram.
Bharat Mandir
Built by Adiguru Shankra Chrya around 12th century, Bharat mandir is situated in the heart of the old town on the Banks of the Ganges. Detailed account of this oldest temple of Rishikesh is available in ancient record of Kearkhand. The Inner sanctum of the temple has the idol of Lord Vishnu, carved out of a single 'Saligram'. In the inner canopy above the idol is Shree Yantra installed by Adi Shankraya Charya. The original temple was destroyed by Tamur lane in 1398 A.D. Lot of old statues, coins, pots and other things of historical importance were found in recent excavations in the premises of the temple.
Rishikund
Close to Trivenighat is the most ancient place, the Rishikund. Ancient records relate this to Kubz Saint, who was blessed by the Goddess Yamuna by saturating this pond by its water. The pond reflects the temple of Ragunath, dedicated to Lord Rama and Goddess Sita.
Health and Ayurveda Tours in Rishikesh.
Posted by Sanjeev Barman at 4:44 PM No comments: