Nepal the land of Himalayas is one of the most beautiful countries in the world. Nepal is a neighboring country of India. It is a small but beautiful country known for rich culture & tradition and a varied range of tourist attractions. There are numerous tourist destinations and attractions which boost Nepal tourism significantly.
Nepal is home to the eight out of the ten highest peaks in the world including Mount Everest the highest pinnacle in the entire globe. There are many beautiful and interesting places, some of these are:
KATHMANDU CITY
The city of Kathmandu, popularly known as City of Temples, is difficult to describe If on one hand it bears the burden of one of the poorest countries in the world, on the other it has also learnt to grow and accept the Western style of civilization, which, in a way, has led to heavy tourist traffic, giving boost to the industry that is the most important source of income for Nepal. Kathmandu is a small city founded around AD 723 as Manju-Patan .The opening of the country around 40 years back led to tremendous growth of tourism in the valley and the capital became a Mecca for trekkers, heaven for hippies, and a thriving cosmopolitan city.
Today Kathmandu is a fascinating old city where pagodas, narrow cobbled lanes, old carved windows, and stone shrines are backdrops to the drama of life that continues unhindered. Here the experiences are amazing, views fascinating, and the climate charming.

PASHUPATINATH
Pashupatinath temple is one of the most important shrines which the Hindus from all over the word are supposed to visit at least one in their life. Several hundred thousands of devotees pay homage to this temple every year. The main temple of Lord Shiva in Pashupatinath area is open only to Hindus. The entry fee of Rs. 500.00 is charged for visitors in Pashupatinath area.
DAKSHINKALI
Literally meaning the Kali of the south, this temple is dedicated to the Goddess Kali, the Hindu goddess of power. Goats, chickens, ducks etc. are sacrificed on Tuesdays and Saturdays. The temple itself is located in a forested canyon and lies 19 Km. from Kathmandu.
BOUDANATH
Buddhanath stupa located on the eastern side of Kathmandu close to Pashupatinath is the largest Buddhist Stupa in the world. Boudhnath is the religious centre for Nepal's considerable population of tibetans and here are a number of thriving monasteries. The entry fee for Bodhanath is Rs. 100.00
SWAYAMBHUNATH
BHAKTAPUR
Also known as BHADGAON meaning the city of devotes, this place is the home of medieval art and architecture. Lying 14Km east of kathmandu city. This place was founded in the 9th century and is shaped like a conch shell. The city is at the height of 4600 ft. Above sea level. In Bhaktapur you will visit the Durbar Square with its array of temples overlooked by the palace of 55 Windows built by King Bupatindra Malla, the Nytapola Teple. This temple, which was also built by king Bhupatindra Malla, is the best example of the Pagoda style and stands on five terraces, on each of which stands a pair of figures, famous strong men, elephants, lions, griffins and goddesses. Time permitting, a visit to the museum of Thanka painting can also be considered. A 30 minute walk brings you to the Dattatraya temple and Pujari Math which can also be done provided there is plenty of time at the clients' disposal.

As the most impressive destinations for the tourists from outside world, Kathmandu's old town, the Durbar Square, offers very rich variety of ancient wood carving, stone sculptures and unparallel architectures. The Kasthamandapa, a wooden building, from which the name Kathmandu originates is located in the Durbar Square. The entry fee is Rs. 200.00
There are some interesting museums in this area. Kumari Ghar, where Living Goddess Kumari has her residence is also here.

PATAN
5 Km. away from Kathmandu city. Patan, also known as Lalitpur, is a city of fine arts, enclosed within 4 stupas, which are said to have been built in the 3rd century A.D. by Emperor Ashoka.You will see Durbar square, the Patan durbar (palace), which houses a bronze collection, the Krishna temple built by King Siddi Narsinh Malla, Hiranya Varna Mahavihar, and Mahaboudha Temple.
A trip to the Tibetan Refugee Centre and the Handicraft Centre will be included during your visit to Patan, where you will witness the hand weaving of Tibetan carpets and molding of metal statues.
LUMBINI
The birth place of Lord Buddha
Nepal is as well known to the world as the sacred birth place of Lord Buddha as it is famous for its mountains and monuments. It attained a high level of civilization and prosperity, and its acclaim is well deserved. Buddha was born into a royal family. Immediately after his birth, he took seven steps in the four cardinal directions, and wherever he set foot, a divine lotus flower bloomed.
The main attraction at Lumbini is the Secred Garden, which is spread out over 8 sq km and contains all of the treasures of this historical area. The Mayadevi temple is the main attraction for pilgrims and archaeologists alike. Here we find a bas relief that shows Mayadevi, the Buddha’s mother, giving birth to him. Standing west of the Mayadevi shirine is the oldest monument in Nepal, the Ashoka Pillar. The pillar was erected by Emperor Ashoka in order to commemorate his pilgrimage to the sacred site.

Posted by Prakriti Inbound at 5:58 PM No comments: 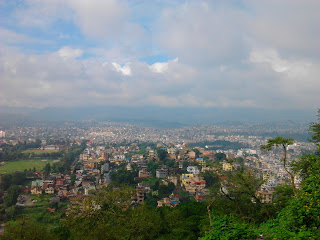 Nepal is named for the Kathmandu Valley, where the nation's founder established a capital in the late eighteenth century. Nepali culture represents a fusion of Indo-Aryan and Tibet-Mongolian influences, the result of a long history of migration, conquest, and trade. Nepal is a roughly rectangular country with an area of 381,200 square kilometers. Nepal is home to the Himalayan Mountains, including Mount Everest. From the summit of Everest, the topography plunges to just above sea level at the Gangetic Plain on the southern border. This drop divides the country into three horizontal zones: the high mountains, the lush central hills, and the flat, arid Terai region in the south. Fast-moving, snow-fed rivers cut through the hills and mountains from north to south, carving deep valleys and steep ridges.

Nepal attributing an angelic beauty is situated between two large countries called china in north and India in three sides. The population density of Nepal is 154 people in per sq.km but the valley and the plains are densely populated. Nepal is a agro based country. Eighty percent of the people of Nepal are depend upon the agriculture .Although the people of various social group, various religions, they really practice "unity in diversity". The follower of one religion respects the follower of another religion. Most of the people of the Nepal follow the Hindu religion and rest of the people follow the religion like Muslim, Christian, and Buddha etc.

Nepal is popular for the angelic beauties, unique wonders and gifts in the world, although it is a land locked country. It is famous for river lakes and mountain. Tourist comes here for relaxation in their holiday. The highest mountain peak Mount Everest in the world, fascinates many foreign tourist every day. Nepal is rich in water resources it is the second richest country in water in the world. Many rivers flow from the mountain and it passes through the terai. Many brooks and stream serves the people in many ways. They are advantageous for irrigation, transportation, rafting and so on.

Nepal seems to be beautiful because of the green forest, National parks and wild-life reserves preserve many wild animals .Many tourist come here to watch them. Nepal is a developing country .About 50%of the Nepalese people are literate .Many school and colleges have been running all over the country .Due to high percent of poverty Nepal many children do not go to school. Nepali people respect each other. They are co-operative. The culture has many symbols from Hindu and Buddhist sources. Auspicious signs, including the ancient Hindu swastika and Shiva's trident, decorate buses, trucks, and walls. Other significant symbols are the emblems (tree, plow, and sun) used to designate political parties.

A typical Nepalese meal is dal-bhat-tarkari. Dal is a spicy lentil soup, served over bhat (boiled rice), served with tarkari (curried vegetables) together with achar (pickles) or chutni (spicy condiment made from fresh ingredients).. The Newar community, however, has its own unique cuisine. It consists of non-vegetarian as well as vegetarian items served with alcoholic and non-alcoholic beverages. Mustard oil is the cooking medium and a host of spices, such as cumin, coriander, black peppers, sesame seeds, turmeric, garlic, ginger, methi (fenugreek), bay leaves, cloves, cinnamon, pepper, chilies, mustard seeds, etc., are used in the cooking.

Most houses in rural lowland of Nepal are made up of a tight bamboo framework and walls of a mud and cow-dung mix. These dwellings remain cool in summer and retain warmth in winter. Houses in the hills are usually made of unbaked bricks with thatch or tile roofing. At high elevations construction changes to stone masonry and slate may be used on roofs. Nepal's flag is the only national flag in the world that is non-quadrilateral in shape, and one of only two non-rectangular flags in use . According to its official description, the red in the flag stands for victory in war or courage, and is also color of the rhododendron, the national flower of Nepal. Red also stands for aggression. The flag's blue border signifies peace. The curved moon on the flag is a symbol of the peaceful and calm nature of Nepalese, while the sun represents the aggressiveness of Nepalese warriors.

The Newar dances can be broadly classified into masked dances and non-masked dances. The most representative of Newari dances is Lakhey dance. Almost all the settlements of Newaris organise Lakhey dance at least once a year, mostly in the Goonlaa month. So, they are called Goonlaa Lakhey. However, the most famous Lakhey dance is the Majipa Lakhey dance; it is performed by the Ranjitkars of Kathmandu and the celeberation continues for the entire week that contains the full moon of Yenlaa month. The Lakhey are considered to be the saviors of children.
Posted by Prakriti Inbound at 1:12 PM No comments: