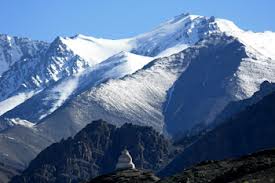 Ladakh, a part of Jammu & Kashmir State in north of India consisting of two districts Leh and Kargil.Leh is a complete beauty in itself. Leh has quite a few amazing places to offer its tourists. The most striking sight of Leh is the group of women, traditionally attired, selling fruits, vegetables and household articles, spinning and knitting, and exchanging gentle banter between themselves and with passers-by.  Leh is one most frequented destinations for the trekkers in India. Ladhak is the largest province in the state of Jammu and Kashmir. The landscape of Ladhak, a high altitude desert, is defined by craggy, barren cliffs and plateaus. Ladhak is a favorite among adventure sports enthusiasts, offeringunique adventures in trekking, mountaineering and white water rafting. While rafting options are available on both Indus and Zanskar rivers, the Zanskar course is more difficult and exciting. The trekking options range from short, day-long walks to visit monuments or monastic settlements to long, trans-mountain treks involving weeks of walking and camping in the wilderness.