Festivals and Fairs of India

MAHAVIR JAYANTI:
India has a large Jain community which celebrates the birth of the last, the 24th Teerthankar, Lord Mahavir. The Jains celebrate the birth anniversary of Mahavir, the founder of Jainism on a large scale. This religious event is largely observed by visiting sacred sites and worshipping the Teerthankars.
HINDU NEW YEAR:
The Hindu New year is celebrated through out the country in nearly all the states with different names. People mainly cook and eat sweets and wear new clothes and wish each other on this occasion. They sing and dance and start with new ventures on this day.

RAMNAVAMI:The ninth day of the first month in the Hindu calendar is celebrated as the day of birth of the Hindu God, incarnation of Vishnu and the hero of the epic Ramayana, Lord Ram. The festival is celebrated all over the country with people fasting and worshipping the Lord for the whole day. Ramnavami is also celebrated as the Vasant Navratra and the celebration starts from the first lunar day of the bright fortnight of Chaitra and lasts up to Ramnavami. On Ashthami or the eighth day, Durga is worshipped. Both Ram and Durga symbolize the victory of good over the evil.
RAKSHA BANDHAN: 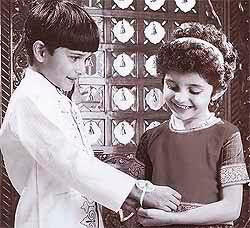 The first full moon falling in August celebrates the relations between a brother and a sister. On this day sisters tie a sacred thread called Rakhi on their brothers' wrists and pray for their well being while the brothers return the love by gifting them and promising to take care of the sisters for the rest of their lives. This full moon day is celebrated as Nariyal or the Coconut Pournima along the coastal areas of India. It is basically festival of the fishermen who pray the sea God seeking his permission to venture into the sea to fish, after rest of two months, which is the peak monsoon season. Sweets made of coconut are prepared and everyone enjoys. In South India, it is celebrated as Avani Avittam. The holy thread is changed and libation of water is offered to the ancestors and Rishis on this occasion.
KRISHNA JANMASHTAMI:Eighth day of the black half in the month of Shravan is celeb rated as the birthday of Lord Krishna, an incarnation of Vishnu. Legend says that the Lord was born in the midnight and it was raining heavily then. People all around the country celebrate this festival with equal fervour. They fast the whole day and rejoice the birth in the middle of the night by breaking the fast. Songs and dances are performed all around the temples of India and children make a small display of the birth scene of Lord Krishna.
Posted by Tamanna at 7:02 PM