Lahaul and Spiti : The Barren Splendor 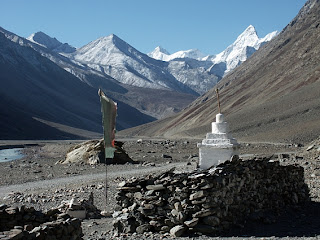 The rugged and the highly located area, is nature's ever changing canvas. Known as the Land of Lamas, Lahaul and Spiti are the passes stretching straight into the cold desert of Ladakh in Jammu and Kashmir. Closed for more than six months during the year due to heavy snow, the land sheds its colours and goes for a complete turnover in spring and summers. Brown barren slopes with icy rivers and cold winds are the common feature of Lahaul and Spiti. The sole access to the this land is the Rohatang pass near Manali., which according to legend was created by Lord Shiva for the people of Lahaul and Spiti to visit the valley of Gods beyond the pass.
There are very few patches of fertile land in this area, where the people live and have formed few villages, most are tribes. These tribesmen, despite the tough weather conditions which makes them fight hard for their livelihood, retain the inner warmth and are always smiling and inviting. The place has been mentioned in the old Buddhist scriptures and was probably inhabited by the Khasa who came from central Asia and settled here. Lahaul and Spiti were ruled by the Ladakh and the Kullu rulers in turns. Eventually this rugged land came under the reigns of the ruler of Kullu; Ranjit Singh who ruled till the British came in and overtook the whole area.Mostly the people of this place are followers of Buddhism. There are beautiful and ancient monasteries and Gompas here where they follow their daily rituals and worship the lord. 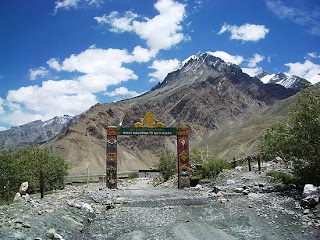 With a varied topography, that is suitable for a hiker or adventure seekers. The rough terrain and absence of heavy rains, makes it suitable for mountaineering. The Gushing Rivers twisting and turning etching the hard rock’s of the area provide good rafting adventure. The grandeur of these terrains and magnificence comes as a surprise at every nook and corner and is definitely awe inspiring, that can make anyone bow down to nature.Due to the prominence of Buddhism in the area one can witness flags fluttering in prayer to the almighty. These colourful flags only add beauty to the barren terrains of the magnificent mountains.
Location: The largest district in the northern state of Himachal Pradesh, Lahaul and Spiti is known as the barren splendour of the Himachal. Bounded by Ladakh to the north, Tibet to the east, and the Kullu valley to the south, Lahaul and Spiti is the gateway to the Leh and Ladakh area of Jammu and Kashmir. Although the district is one made out of two subdivisions of Lahaul and Spiti, these two areas differ highly in their altitudes. The rugged region receives a scanty rainfall and therefore is favourite spot with the trekkers during the time when the monsoon lashes throughout the country. It also has many passes for the adventure seeker to try on.
Languages Spoken: Himachali and local dialects
Long Distance Code: +91-1906
Importance: The barren gatewy to Tibet
Area: 55673 sqkm
Best Time To Visit: May To July
Lahaul and Spiti Attractions:
Rohatang pass 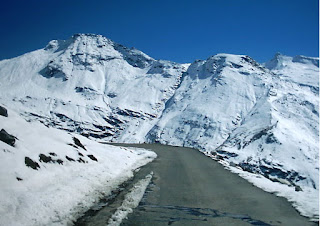 Situated about 51 km from Manali town at an altitude of 4,111 meters (13,400 ft.) on the highway to Keylong, is the Rohatang Pass. This is the pass which separates the picturesque and green valley of Kullu and Manali to the stark contradiction of barren brown mountains and deep valleys of stones and rocks. Rohatang is the place where the majesty of the mountains is at its height in splendour.
Rohatang in Tibetan language means a heap of dead bodies. And true to these words, Rohatang definitely would take toll of humans and property, every year due to its harsh weather. The pass becomes hazardous due to frequent avalanches. Although there is face over to the pass in summers and spring when the pass reels under beautiful flowers and birds and rare variety of butterflies.There is a beautiful lake to the left of the pass known as Doshohar Lake. The Sonapani Glacier and the Gyephang La peaks offer a splendid view. At the height of the Rohatang pass one can see a small stone enclosure and a water spring, believed to be the source of River Beas.Being the only route to enter the arid region of Lahaul and Spiti, trekkers and hikers can often be seen on the pass. It is closed in winters due to heavy snowfall and is open from April to September.
Keylong
Keylong is the district head quarters of Lahaul and Spiti. Situated at an altitude of 3156 meters Keylong is the main centre on the trade route between the Rohatang and Baralacha passes above the Bhaga River. It is an oasis in this cold desert. Being the most commercialized place it also has many facilities and a regular market. The Khardong Monastery is 4 km from here contains barrel like prayer drums, paintings, ancient weapons, musical instruments and life size statue of Lord Buddha. There are three Monasteries in the radius of few kilometer; Tayul, Khardong and Shashur which are also worth a visit.
Tandi
Tandi which is hardly 8 kms from Keylong is one of the most picturesque places of the valley, with abundant natural beauty and the mythological stories to go with it. It is situated on the confluence of the Chandra and the Bhaga Rivers which offer a splendid view.There are many stories about the name and the confluence of the Rivers in Tandi. The Pandav brothers along with their wife, Draupadi, started ascending to the heaven from this route. Draupadi slipped from this very place and died and could not reach heaven in the human form. Since then the place has been known as Tan Dehi, meaning in Human form and the word Tandi is the version of the same.
Another story about the confluence of the two rivers says that Chandra and Bhaga were the children Moon and Sun respectively, who wanted to get married. Both f them took their own route and reached Tandi and were eventually married. The confluence reminds one of this legendary love story thus enhancing its beauty.
Suraj Taal Chandra Taal 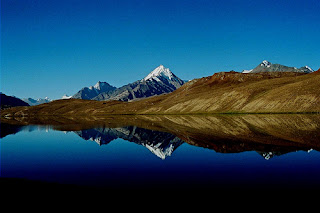 These two beautiful lakes are on the Baralacha la, are supposed to be the origins of the Bhaga and the Chandra rivers respectively. The Baralacha la means pass with cross roads on summit on the Spiti and Leh road. The Suraj Taal is the lake dedicated to Sun god from where the origins of Bhaga Rivers can be traced down. The crystal clear waters of the Lake freeze and is full of snow all around in winters. But in summers the deep icy blue waters of the lake reflect the magnificence of the mountains and the nature around. Situated in a natural amphitheatre, this lake presents the exuberance of natural beauty.
The Chandra Taal which is the origin of the River Chandra is also a natural lake situated at the height of 14000 feet. It is situated in a broad grassy plain which was a glacier earlier. A small little island in the middle of the lake known as the samudari tapu is supposed to be the dwelling place of a mermaid and therefore is unreachable. The Chandra Taal is favourite with the shepherds of this region as there is ample grass on which the herds can be fed on. Ducks and cranes are also found in abundance on this lake and definitely make a gorgeous sight. The icy cold water is so clean and clear that one can even see the stones underneath the water.
Kunzum Pass
What Rohatang is for Lahaul, Kunzum is to Spiti, the sole passage through which one can reach Spiti is through the Kunzum Pass which is at an altitude of 4590 meters. The panoramic view of the second longest glacier in the world, the Bara-Sigri glacier can be thrilling and spell bounding from this pass. There is a temple at the top of Kunzum pass dedicated to Goddess Durga.
Monasteries of Lahaul and Spiti
Either due to the proximity to the Tibet or due to the trade route from India to Tibet, Lahaul and Spiti has many monasteries and Gompas. The people of this place ardently follow the Buddhists religion. Few of the important monasteries are as follows.
Kye Monastery: 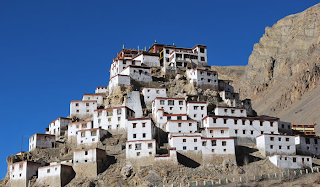 It is situated 12 kms. North of Kaza and serves the western population of Spiti. It is the oldest and biggest monastery of the valley and located at (4116 m) above Kye village. It houses beautiful scriptures and paintings of Buddha. It is also a training centre for Lamas some books of high aesthetic value in its possession.
Dhankar Monastery:
Dhankar is a big village and an erstwhile capital of central Spiti. A huge fort on atop the hills used to serve as a prison in the olden days. It is the living place of 100 lamas and has some Buddhist scriptures in the Bhoti Language. The principal statue in this monastery is that of the 4 complete figures of Buddha, seated back to back in Dhyan or meditating pose. It has relics in the shape of paintings and sculptures.
Tabo:
One of the most important monasteries in the region, the Tabo monasteries also the oldest, established in 996 A.D. It has some beautiful rock paintings comparable only to the Ajanta frescoes of Maharashtra. Tabo holds the distinction of being the largest monastic complex in Spiti and is the brainchild of the great translator and teacher, Rinchensang Po.
Guru Ghantal monastery:
Located on the confluence of the Chandra and the Bhaga rivers, the Guru Ghantal Monastery, is probably the oldest centre of Buddhist pilgrimage. The archaeological evidences found at this site indicate that it had been a significant Buddhist as well as Hindu pilgrimage site in the distant past.
Posted by Sanjeev Barman at 12:27 PM